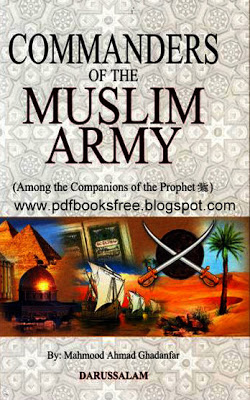 Commanders of the Muslim Army Among the Companions of the Prophet (s.a.w) written by Mahmood Ahmad Ghadanfar. Translated into English by Jamila Muhammad Qawi and edited by Muhammad Ayub Sapra. This book is about the life and achievements of the Prophet’s Companions who led the Muslim army that was trained by Messenger of Allah. Once during the training when the Prophet (s.a.w) asked about the strategy to adopt in the battle, one of his Companion, ‘Asim Bin Sabit (r.a) had stood up with his bow in his hand and replied:
“When the enemy is a 100 yards away, we will use our bows and arrows; when the spears break, we will have a hand to hand combat with our swords.”
Doubtless this was the way to fight a battle. Whoever wishes to take part in a battle should adopt the strategy of Asim bin Sabit r.a.
These great martial Commanders improved upon and developed the strategies and principles first enunciated by the Prophet (s.a.w). They loved death more than life in their pursuit of righteous and true religion, therefore sometimes the opposing forces were ten times larger than the Muslim army and with superior arms, yet most often it were the forces of Islam which were victorious. Therefore the Prophet (s.a.w) gave some of them the title of Saifullah (Sword of Allah) and the title of Lion of Allah.

After the death of the Prophet (s.a.w) the empire of Islam spread over an area of 10 Hundred thousand square miles. We should have to study inevitably the lives of these remarkable military leaders if we are deeply interested in learning about the Islamic history.
Click on the following link to download this book in pdf format.