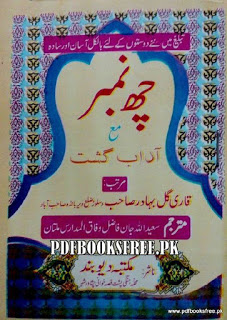 Che Number o
Adaab e Gasht Book Authored by Qari Gul Bahadur Sahib. In this short treatise, the
author has tried to expound with some detail of the six qualities widely known
as the Six Points] on which the teachings and practices of the Tablighi Jamat
are based. To enumerate, they are:
(i)
The Kalima (Phrase), La ilaha illa’llah,
Muhammadur Rasulullah
(ii)
Salat (The Prayer)
(iii)
Ilm & Dhikr (Knowledge and Remembrance)
(iv)
Ikram al-Muslim (Honoring Muslims)
(v)
Ekhlas (Sincerity)
(vi)
Dawah & TablighA (Invitation and Conveyance).
It is said that
in addition to learning them, acting in accordance with the Six Points
facilitates the following of the entire Deen of Islam.
A basic pattern
has been followed throughout this work which looks into the aims and
objectives, followed by the virtues or merits of each of the Six Points Also,
an outline has been made to help achieve the aims and objectives mentioned at
the beginning of each Point.
Visit the following links to read online and download the complete 6 Numbers book in Pdf format for offline reading and references
Read online
Download 6 Number Pdf