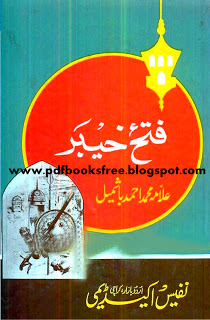 Ibn Ishaq said when the Messenger of Allah (peace be upon Him) marched from Madinah to Khyber he went by way of Isr, and a mosque was built for him there; then by way of Al-Sahbih. Then he went forward with the army until he hatted in a valley called Al-Raji, halting between the men of Khyber and Ghatafan so as to prevent the latter reinforcing Khyber, for they were on their side against the Messenger of Allah (peace be upon Him). When Ghatafan heard about the Messenger’s attack on Khyber they gathered together and marched out to help the Jews against him; but after a day’s journey, hearing a rumor about their property and families, they thought that they had been attacked during their absence, so they went back on their tracks and left the way of Khyber open to Messenger of Allah (peace be upon Him).
Lets read about this spiritual and decisive war of Islam in Urdu language. Download complete book in pdf format to read offline.

2 thoughts on “Fatah-e-Khyber In Urdu”