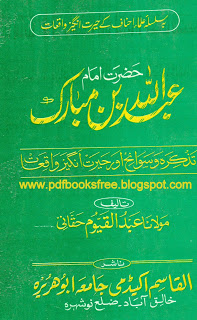 Title name of the book is “Hazrat Abdullah bin Mubarak” Written by Maulana Abdul Qayyum Haqqani. Abdullah Abu Abdur Rahman bin al-Mubark bin al-Hanzali was born in 118 Hijri at the time of Caliph Hisham bin Abdul Malik. He was an Islamic scholar & Muhaddith. He is famous for his memory and zeal for Education. His fathers name was al-Mubarak and described as a Turk from Khurasan owned by a trader from the Banu Handhala tribe. Mubarak consequently married with Hind the daughter of the traders.It is reported that ‘Abdullah bin Mubark left his home and traveled to hunt education within the year 141 Hijri. He had academics like Abu Hanifa and Imam Malik. He was famous for Ribat defending Islamic borders on the frontiers of Tarsus and Al-Massisah and fighting against the Romans.
This book is containing the complete history and biography of this great Muslim Scholar in Urdu language. Download in pdf format to read offline.