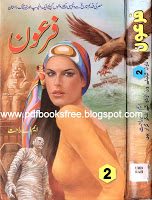 The title of the novel is “Firaon” Part 2. Written by M.A Rahat. An Urdu historic novel in pdf format. Exciting and surprising fiction for those who love the ancient history of Egypt. The most mysterious land of the universe where centuries are still alive, the land of million secrets, the land of pharaohs which having the complete history of Egypt.
An amazing story of a mysterious researcher, whose book is self-explanatory. Who was Professor ‘Zagh’? Whether he was a human being or an evil?
A strange and mysterious bird “Shala Shalai” was more cunning than a human being.
An amazing story of such a virgin whose presence was a unique secret behind the six thousand years of history. She was the prisoner of time and ancient souls were her custodian. The custodian soul “Antaria” of the ancient history of Egypt, in the new modern era. A sacred secret, for knowing which the historians were even ready to die.
Cleopatra 2nd placed decorated her enemies in coffins after killing them. She was summoned by the court of souls and she went into the past of six hundred years go again. To read the complete story, download two parts of the novel in pdf format.