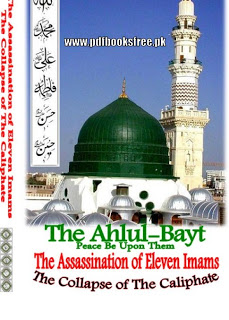 The Ahlul-Bayt Assassination of the eleven imams & The Collapse of the Caliphate. Rise of Tryanny & Oppression in Islam. Written by His Eminency Dr. Hazrat Sheikh Shah Sufi M N Alam.

The Note From the Author: This is a mere effort to introduce the illustrious light of the family of Prophet Muhammad (SAW) to the generation of the needy, a time period indigent of iman i.e. faith and understanding of Islam’s eventful Authentic history. The history outlined in these pages is illuminated by the Great self‐sacrifice of Ahlul‐Bayt to  preserve the Legacy of the Rahmatulil ‘Alameen, Ashraful Ambiyyah wal Mursaleen, H. Muhammad (SAW) The Last and Final Messenger sent to all Mankind as a Mercy. Living as we do in later times it is fruitful to bear in mind the statement of Imam Malik (RA):

“Only what was right for the first of this ummah will be right for the last of it.”
This should be even clearer to the present day people of the world today since the fantasy of evolution (Darwinism), progress and development (Materialism) is increasingly being exposed for the hollow falsehood it is. The Noble and Best of Mankind (SAW) and the best of generations have already passed on. We who are alive now must model ourselves around their example, instruction on (permissible and forbidden) in harmony with Holy Qur’an.
May this book be of greatest value to those who take it in hand as an aid and inspiration for establishing a just and illuminated civilization in the present age, AMEEN.
A few thousand words could never produce the depth of the lifetime of even one of these noble and greatest personalities let alone more than one. However, the dire need for English speaking Muslims to have some access to these illustrious beings free from Salafi, Shi’a, Ohabi, Tablighi, Jamaate and so‐called Sunni propaganda. (Note: in contrast the shi’a and Sunni are the family and companions of Ahlul‐Bayt as long as they remain on adherence to their command and example.) May Allah give them proper knowledge to understand the status Ahlul‐Bayt.
A Muslim means The one who Surrenders to Almighty God. The Concept of surrendering to Oneness of God had been around since The Prophet Abraham, the Descendants of Prophet Abraham are the Crowned creations of Almighty God Jews, Christians and Muslims are cousin brothers, in accordance of Holy Quran. A Muslim Prays five times and in their five times daily prayer They are constantly reciting the Durood Sharif as a part of the prayer in brief “Allahumma Salliala Sayidina Muhammad wala Ali Mohammad, KamaSallaita Ibrahima walaali Ibrahim Innaka hamidum Majid” Which means “May Allah grant Mercy to the descendants of prophet Mohammad (SM) as well as descendants of Prophet Abraham (AS)” So Why are the Jews, Christians and Muslims are fighting with each other, because of the SECTARIAN segregation among the followers of Jews, Christians and Muslims. A point should noted, the followers of Judaism, Christianity & Muslims are all aware of the COMING OF THE PROMISED ONE but they are all spreading it in their own way for their better interest even in Hinduism and Buddhism. Therefore, a leader must emerge to reunite the followers those who practices the path of Oneness of Almighty by devaluing the Sectarian segregation among Jews, Christians & Muslims.
If you are fortunate to research the greatness of Ahlul‐Bayt (may Allah be pleased with them), it is also vital, extremely vital to grasp the greatness of their sacrifice and efforts to preserve an unadulterated practice of Islam. Otherwise, we may become trapped in the helpless idealism of those who romanticize their  efforts while ignoring the actual techniques used to destroy the Families of Pure Islam. Modern historians associate the collapse of the Caliphate with the elimination of the Ottoman Empire in 1928, followed by the systematic fragmentation and division of Ottoman Empire after WW1. Therefore, many pains have been undertaken to show in the following pages how tyranny and oppression destroyed the caliphate of Islam in Karbala, over more than 1,300 yrs. Ago, with the martyrdom of Abu Ahrar (Father of freedom) H. Hussain ibn Ali ibn Abi Talib (RA) in 63 AH. / 680  C.E.
Then continued  to  oppress  key  moral figures  and their families who, though their swords were in the sheaths, their words and deeds made every immoral things outlawed just as Nabi Muhammad (SAW) did in Medina. In order to understand this important fact we must recognize three pivotal phases of Islam. These phases consist of the following: Hazrat Mohammad (SAW), Hazrat Ali Ibn Abi Talib (AS), Hazrat Hassan Ibn Ali (AS), Hazrat Hussein Ibn Ali (AS) & Hazrat Zainul Abedeen (AS).
Click on the following links to read online or download the complete book in Pdf format to read offline.