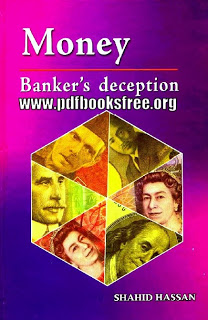 Money Banker’s Deception is an outstanding book on this topic. It has been written at just the right time and is highly relevant to problems confronting, not just Pakistan, but the overwhelming majority of countries in the world. It has been now become abundantly clear that for the past tow centuries, and even more, global politics has been increasing controlled by a cabal of families known euphemistically as “International Bankers”.
These families have managed to amass astounding wealth over the course of time and understand more about financial manipulation than any other organized group. Things have come to such a pass that David Icke has been forced to state: “Money is a nonexistent theoretical fore that has never, does not, and will never exist, except in theory on computer screens. People die and starve because they don’t have enough digits on the screen” Governments, lawmakers and academia works for this cabal.
It has been pointed out by Dean Henderson that these banking families, apart from owning all major banks and all major oil companies, are among the top 10 shareholders in each of the Fortune 500 companies. It may be borne in mind that in 2009, among the top 100 economic entities in the world, there were 44 corporations. These families own the central banks of numerous countries such as USA, UK, etc the equivalents of the State Bank of Pakistan and issue currency, such as Federal Reserve notes (known as dollars) and give this currency to the government as debt. Interest is charged on this debt twenty four hours a day, seven days a week.
Once these facts are kept in view it automatically becomes clear who really runs the world. The GDP of USA is around 14-15 trillion dollars and the debt owed by the US Government to the privately owned Federal Reserve is now equal to the GDP. There is no way the people of the US can now repay this loan. As long as the present system exists the US shall remain in the bondage of the banking cabal. The goal of these banking families is a One World Government under their control. This is the New World Order. It all boils down to an understanding of Money.  Mr. Shahid Hassan’s book deals with this vital subject.
Mr. Shahid Hassan has written this concise book with great clarity and I would unhesitatingly recommend it to every reader with an interest in the woes afflicting mankind. It is the duty of everyone to acquire an understanding of the money question. I would particularly recommend it to the younger generation. It will lead us to an understanding of how the globe is controlled by the international bankers and point out the key group behind almost all major global upheavals, including world wars and so called revolutions. Such understanding may eventually show the younger generation the path to restoration of human scale and the rebuilding of society on humane principles. The other options are eternal bondage under what Winston Churchill called the “High Cabal” or eventual extinction of mankind in a nuclear holocaust.