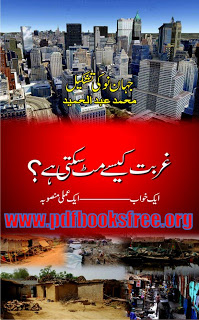 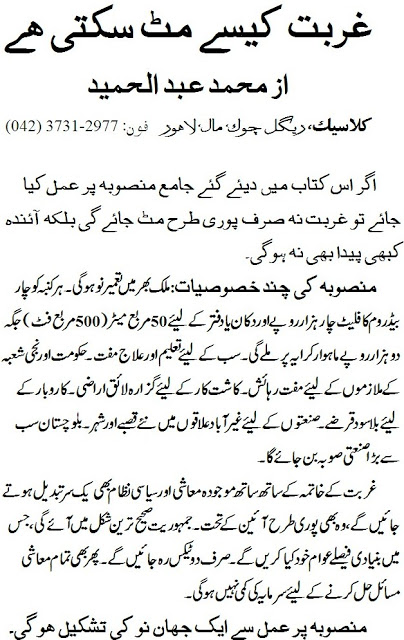 This is a guest post by Muhammad Abd al-Hameed

“Ghurbat Kaisay Mit Sakti Hai” The plan for eradication of poverty in Pakistan. The book gives a practical plan for complete and permanent eradication of poverty. It provides solutions to all the problems that have been preventing the elimination of poverty. Rather than discussing theories and analyzing issues, the book only gives a step-by-step plan.
The implementation of the plan will not be difficult. To begin, the Prime Minister will get two ordinary laws passed, decide that the Government will provide housing to all its employees in 10 or so years and appoint just one person to start the process.
As the process starts, the political and social system will also change. Consequently, the implementation of the plan will transform the society and create a model for other poor countries.
An executive summary, “حاصل کلام,” will tell you what the book is all about.

After doing his
M.A. in Economics from Government College, Lahore, in 1961, he started his
career at leading Lahore-based English daily, The Civil & Military Gazette.
After its closure, he moved on to Imroze, a leading Urdu daily. After a few
years in journalism, he had to join Pakistan Railway as Information Officer
(Class I) under pressure from his family that wanted him to have “a respectable
job.” He lost his job after he refused to join a gang involved in a huge fraud,
though he was offered 120 times more money than his annual salary every year.
He never regretted his decision, though consequently he had to spend the next
two decades in financial wilderness.
In 1987, he got
an opportunity to put to work his ability to solve problems and his knowledge
of modern methods and technologies, when he was appointed Director, Research
and Reference, in the Punjab Government.
After his
retirement, he served for over six years in the National Re-construction Bureau
of Government of Pakistan. As a consultant, he contributed studies and
solutions on many issues of national importance.
His passion for
finding solutions to problems, both big and small, is unabated. He continues to
write about them, offering practical solutions. His writings are available on
his blog.
He believes he was at
his creative best while writing this book. You can find more useful articles and books on his personal blogs i.e.
https://mahameed.blogspot.com
https://mahameed-comments.blogspot.com
https://mahameed-articles.blogspot.com
https://mahameed-poverty.blogspot.com