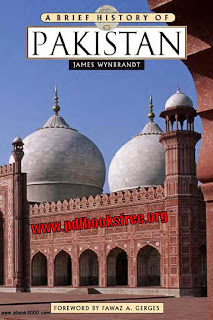 A Brief History of Pakistan By James Wynbrandt Free Download

A Brief History of Pakistan Book Authored by James Wynbrandt. Introduction: Situated in the northwest corner of the Indian subcontinent, the Islamic Republic of Pakistan occupies a position of historic importance. Its strategic location, its role in the birth of civilization, and its influence as a crossroads of political and religious ideologies has kept it at the forefront of world events. Geographically, present-day Pakistan has long been a gateway between Eurasia and the subcontinent and between East and West. Its culture and history have been enriched by the countless invaders, traders, and settlers who have been a part of the region’s past. Some, like Alexander the Great and his army, merely passed through but left a lasting mark. Others, such as the Arab armies spreading the word of Islam and the British who imposed the ways of the West, became an integral part of the region’s culture and character.

Some of humankind’s greatest works of art and architecture, of verse and word, were created here. Today the region again has taken an outsized role on the world stage: It is a linchpin in the global struggle against terrorism, a cauldron in the heated conflict between secular and theocratic rule, a poster nation for the struggle between autocracy and democracy, and a nuclear power whose relations with its neighbor India have made this one of the most unstable regions in the world.

Most Westerners know little about this region or nation. Though an independent state only since 1947, its homeland has a history unique from the rest of the subcontinent it shares with India. Here the Indus Valley Civilization, one of the world’s earliest and greatest, flourished contemporaneously with the Egyptian and Mesopotamian empires. The region has also been a cradle of spiritual awakening. Here Hinduism was born in the aftermath of the Aryan migration into the region that began about 1700–1500 B.C.E. A scant distance away, the Buddha received enlightenment, founding a religion and philosophy that transformed the region. Islam, which would have an even greater impact, gained its foothold in Asia in
what is today Pakistan. And the Sikh religion can trace its roots to the region as well.

One of the most fabled dynasties in history, the Mughals, a regime so rich and powerful that today its name is synonymous with those attributes, ruled from here, as over the years have robber princes, religious zealots, and ruthless vagabonds. During the British occupation, what is now Pakistan became a principal theater in the Great Game played by the West against Russia for regional dominance. Pakistan’s role as geopolitical fulcrum grew after independence, alternately aligning itself with the East, the West, and as an independent in its foreign policy. It often stood by the United States as an important ally during the cold war. It was from here in 1960 that the U-2 spy plane shot down by the Soviet Union took off. Pakistan also helped turn Afghanistan into the Soviet Union’s Vietnam after their occupation in the 1980s. In the new century it has become a major battleground in a new global struggle, pitting terrorism fueled by radical Islam against progressive and secular social forces.

Politically and economically, Pakistan has had a troubled domestic history. Periods of civilian rule marked by corruption and political gridlock have alternated with years of military dictatorships. Financially stunted at birth, Pakistan has seen improvements in the economy since, which though impressive, have still left the vast majority of its citizens living in poverty. And the dilemma over the role of Islam in government and society continues to stoke contention.

Today these issues have again brought Pakistan to a crossroads. How it resolves these dilemmas will have repercussions far beyond the nation’s own borders. The goal in this work is twofold: to provide an accessible account of the people and events that have shaped what is now Pakistan, and to provide a foundation of understanding so readers can be better informed in considering the next chapter of its history.