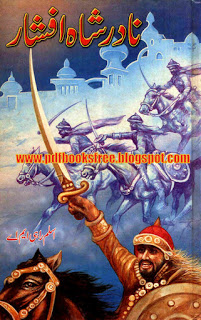 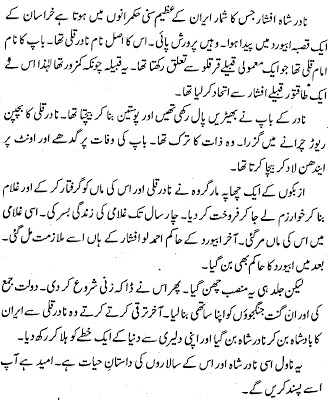 Nadir Shah Afshar is one among the great Sunni rulers of Iran. He was born in Abiword town of Khurasan (Modern Turkmenistan) and was brought up there. His real name was Nadir Quli. His father name was Imam Quli which belonged to an ordinary Qurqulo tribe. This tribe was week, therefore it made alliance with a powerful tribe of Afshar.
Nadir’s father reared sheep. He prepared Fur (skin) and sold it. Nadir Quli spent his child hood in grazing. He was Turk by cast. He loaded fire wood on donkey and camel and used to sell, after the death of his father.
A group of Uzbek raiders arrested Nadir Quli and his mother, made them slaves, took them to Khwarzim and sold there. They spent life of slavery for four years. His mother died in slavery. He was given job by Ahmad Lo Afshar ruler of Abiword Town. (Later on he became ruler of Abiword Town). But soon this post was snatched. Then he began robbery, and collected wealth. He made (many) innumerable warriors his companions.
Finally making progress he became king of Iran instead of Nadir Quli and then became Nadir Shah. He destroyed a part of the world with his bravery.
This novel is the life history of Nadir Shah Afshar and his commanders. It is hoped that you would like this story. You can download the complete novel from the below mentioned link in PDF format to read offline.