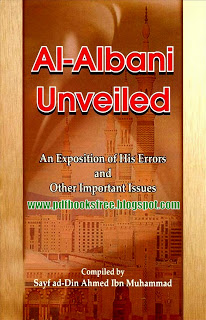 The book “Al-Albani Unveiled” An Exposition of his errors and other important issues Compiled by Sayf ad-Din Ahmed Ibn Muhammad.
This short piece of work has been edited and abridged from the four volume set which emphatically and clearly outlines al-Alban’s mistakes, contradictions, slanders and even lies in the honourable and sacred Islamic Science of Hadith (Uloom al-Hadith), by the well known contemporary Shafi sholar of Hadith and Fiqh, Al-Shaykh Hasan ibn Ali al-Saqqaf (may Allah reward him for his effort) of Amman, Jordan; from his work entitled: “Tanaqadat al-Albani al-Wadihat” (The Clear Contradictions of al-Albani).
Click here to read online or download this book in pdf format.