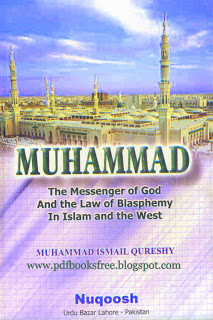 Title name of the book is “Muhammad (s.a.w) The Messenger of God And the Law of Blashpemy in Islam and the West” Written by Muhammad Ismail Qureshy Senior Advocate Supreme Court of Pakistan and Chairman, World Association of Muslim Jurists. A gift to all those who love, respect and uphold the Dignity of the Holy Prophet (s.a.w) the last messenger of Allah and all the Preceding Prophets (peace be upon them).
This book is a valuable addition on the subject. The book is likely to inspire great interest amongst the researchers, religious scholars, social scientist and the legal community. The author through his well documented and researched material has countered the biased opinion in the West about Islamic practices and laws and the Prophet of Islam. The book is divided in three Parts. Part-1 contain the discussion about Prophethood of Muhammad (s.a.w) comparative study of different religions, the impact of Islamic code and practices on the followers of other religions. The author has quoted in this part of the book, the opinion of well known western leaders. Philosophers, Historians, critics and writers about the Prophet of Islam and the impact of Islam and Islamic civilization on the western society.
Advertisement

In part II of the book the author has discussed Blasphemy Laws with reference to its so called conflict with the Human Rights in global perspective. The author has traced the classical concept of human rights as it existed before and after the advent of Islam in Europe and other countries of the World and compared it with the human rights conferred by Islam on the human beings without discrimination. The Blasphemy laws as it exist in UK, European countries, USA and Islamic Countries of the World has been discussed in this part of the book with reference to leading cases on the subject which makes this book useful for practicing lawyers.

In the last Part 3  of the book the author has reproduced the opinions of Muslim scholars on offence of Blasphemy and punishment prescribed for it. There appears to be near consensus amongst the scholars of different school of thoughts in Islam about the punishment prescribed for the offence of Blasphemy. By incorporating the judgment of Lahore High Court in the famous case of Ilamdin Vs. King Emperor and relevant text and extracts from leading judgments on Blasphemy rendered by the Courts in Pakistan, England, USA and European Court of Human Rights in the appendices the intrinsic value of the book has been greatly enhanced for ordinary reader as well legal professional for use as a reference book.

Learn in English language, download in pdf format to read offline.
Download link
Download link
Password:  pdfbooksfree.blogspot.com
All the books posted here are only for reference and academic functions solely. If you actually love books please support the writers/poets and get the initial laborious copies from the book seller of your native market.