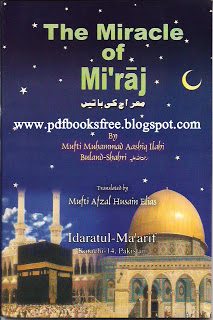 Title name of the book is “The Miracle of Miraj” Written by Mufti Ashiq Ilahi Buland Shahri r.a. Translated in to English by Mufti Afzal Hoosen Elias. This book discusses in detail the incident of the Meraj Shareef as it has been described in the books of Hadith, Tafseer and Seerah. It also describes the conditions of the higher and lower realms as witnessed by Rasulullah (SAW). Included also, are the accounts of riding the Buraaq, leading the Ambiyyaa (AS) in Salaah, ascending the heavens, meeting the Ambiyaa there, and receiving a warm welcome from them. Also explained, is the way in which Moosa (AS) had repeatedly advised Rasulullah (SAW) to request Allah Ta’ala to reduce the number of compulsory Salaah from fifty to five. The author has also depicted scenes of the Sidratul Muntahaa and the Albaytul Maamoor. The book also explains Rasulullah (SAW)’s entry into Jannah, his seeing of Jahannam, and other events in detail. It also discusses the secrets and the wisdom behind the various events in the journey of Meraj. Towards the end of the book, the author answers some of the objections raised by skeptics, and those who deny the Meraj of Rasulullah (SAW).
Read in English language. Download in pdf format to read offline.
Download link
Urdu Version here