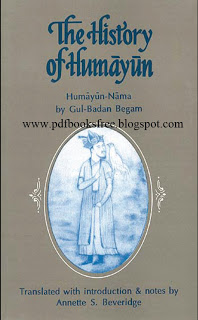 Title name of the book is “Humayun Nama” The History of Humayun. Humayun nama was written by Princess Gul Badan Begum originally in Persian language and translated into English by Annette S. Beveridge.

Advertisement
Princess Gul Badan Begam was a daughter of Zaheer-ud-din Muhammad Babar, in whom were united the lines of highest Central Asian aristocracy namely, that of Timur the Turk, through his son Miran-shah; and that of Chingiz the Mughal, through his son Chughtai Khan. He was born on February 14th, 1483, and succeeded to his father’s principality of Farghana when under twelve. He spent ten years of early youth in trying to save his small domain from the clutch of kinsmen, but, being forced to abandon the task, went southwards in 1504 to Afghanistan, where he captured Kabul from its Arghun usurpers.
Princess Gul-badan was born somewhere about 1523 and when her father had been lord in Kabul for nineteen years; he was master also in Qunduz and Badakhshan; had held Bajaur and Swat since 1519, and Qandahar for a year.
This history, which contains an abridgment of the affairs of his Majesty, Timur, and of his glorious descendants, and of the events of the days of Akbar Badshah, down to the twenty second year of his reign, was written in the time of Shah Baba related to Shah Jahan Badshah, son of Jahangir Badshah, son of Akbar Badshah.

Download the complete book in pdf format in English language to read offline.