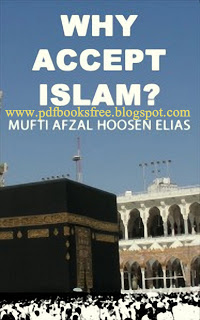 Why Accept Islam? is an Islamic booklet written By Mufti Afzal Hoosen Elias. This booklet answering the question ” Why Accept Islam” in detail.
All Praise is due to Allaah, our Creator, Nourisher and Provider. Peace and Blessings be upon all the Ambiyaa (A.S.) and upon the last and final Rasul (Messenger) Muhammad (S.A.W.). Peace and blessings upon his companions who accepted and propagated DEEN (religion) to the entire world.
Man has been imbued with Aql (intelligence). Whenever any person is given an extra benefit there arises a corresponding responsibility. A poor person, for example does not have to pay as much tax and nor does he have as many obligatory duties such as the giving of alms etc., as the rich man.
Whenever a person with the extra benefit (in this case, money), refuses to acknowledge the responsibility that go with it, then the results are horrendous. This can clearly be seen when those who have refused to use their wealth responsibly, become engulfed in all the trappings of luxury which result in many vices such as adultery, divorce suicide and even murder.
Man, when compared to other mammals, has been endowed with a superior intelligence. This enables him to distinguish between right and wrong. If he refuses to do so, the evil consequences are far greater and more catastrophic than when an animal behaves irresponsibly. This is so because animals have a limited amount of intelligence and therefore their capability to do harm is equally inferior, and they do not have the intelligence to connive as well as man can. Have you, for example heard of an animal manufacturing alcohol, selling it to others and, despite observing the harmful effects thereof, still advertising it through every possible media? This is why the need for religion exists. Now we shall prove why this religion has got to be Islam, thus answering the question: “WHY AM I A MUSLIM” as well as “WHY SHOULD I CHOOSE ISLAAM AS MY RELIGION.?”
Download the complete book in pdf format to read offline.
Download link 1