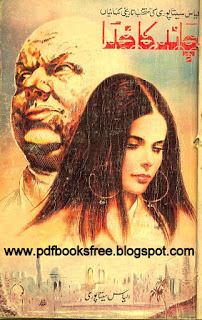 Advertisement
Title name of the book is “Chand Ka Khuda” (The God of Moon). Written by Ilyas Seetapuri. This book containing 4 beautiful historical stories in Urdu language with the following titles.

A young saint chose seclusion after being disheartened by the atrocity of monarchy. What is the right path and where is the right path? In respect of his thoughts and struggle, he had to face bitter experiences of life. He tried to take refuge in Christianity but notable and recluse monks told him that the women was the root cause of all sins, there from, he returned to Islam with a broken heart where he came to know that woman and man are dress for each other. The helpless saint became confused. Thereafter, the monarchy played and amazing but practical joke with him by calling upon a pretty woman for his company. When the magic pen of Ilyas Seetapuri converted this in a legendary then it become a beautiful and everlasting story.
2.   Lahoo Ka Chiragh (Lamp of Blood)
In the second half of the eighteenth century, when the English traders started dreaming to become the rulers of India, Nawab Siraj-ud-Dola was their first ever prey. What tactics were used by the white foreign traders for subduing this young and inexperienced Earl (Nawab), a complete and brilliant collection of curiosity and writing art. A beautiful picture of the civilization of that’s era, every thing that a reader wants to read in a story.
3.   Surkh Dastaan (Red Legendary)
Pen picture of the cruel ‘Hijaj bin Yousaf’ of Islamic History. His name was the message of fear and terror. When this cruel man of history met a woman, he smashed into pieces. A collection of fear, curiosity, love and terror.

The up roared legendary of the era of Mehdi Abbasi. He claimed himself as a god. He inhabited a city of simple followers in his surrounding. Then he created a moon for that city, which used to rise in the evening and set in the morning. An interesting, amazing and historical legendary with beauty and love.
Download the complete novel in pdf format to read offline.
Download links