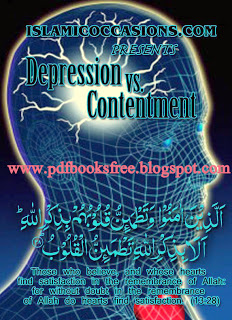 Book title is “Depression VS Contentment” Presented by Islamic Occasions.com.
We all experience unhappiness and bereavement at some point in life time. Our faith and belief in Almighty God’s will are usually enough to console and strengthen our sense of loss, grief or sadness. However as human beings we are prone to feelings of depression under serious and difficult circumstances. It has been said that depression affects up to 40% of people at some stage in their lives, and has been found to be more common in women than in men.
Depression can seriously affect a person’s daily life. If you have grown tired of life, or wish to go someplace where you can be alone, or you are always nervous, stressed, worthless, restless, sleepless and gloomy, you are probably suffering from depression. One could expect such a person to be suffering from this ‘illness’ who is incapable of fulfilling his needs or a time has come in his life that he feels totally helpless and defeated, either as a result of an unfortunate death, a missed opportunity, a financial loss, persistent feeling of depravity, or some other unexpected (class exam results) disappointing experience, long-term illness, unnecessary negative thinking. This can invariably contribute towards feelings of jealousy, fear, cowardice, pessimism and insecurity. A heightened form of this ‘illness’ could force the sufferer into committing suicide or even setting himself ablaze. It is a pity though that today this ‘illness’ has become rampant at every level of society and its disastrous effects result in the form of all sorts of hideous crimes depending upon the circumstances and history of the sufferer.
Our objective is not to delve into the causes of depression, rather to focus on just the ‘illness’ itself from a different perspective. The analysis is from a religious perspective and becomes all the more important for a Muslim since the word despair should not exist in his dictionary.
In layman’s terms, depression can be of two forms: one finds its roots in the chemical disorientation of the sufferer whereas the other can be attributed to social circumstances. A psychiatrist can help recuperate the victim belonging to the former category whereas a psychologist can attend to cases forming the latter group.
From a social viewpoint it can be said without any misgivings that a true Muslim can never suffer from this ‘disease’. The answer lies in this fundamental understanding, which governs (or should govern), a Muslim’s life: his life with all its ups and downs is a trial. “No affliction comes about but by Allah’s permission; and whoever believes in Allah, He guides aright his heart; and Allah is Knower of all things.” (Holy Qur’an 64:11)
Therefore for a Muslim, difficulties, suffering, failures and adversities are nothing but a test from Almighty God. Perhaps as vital for the continuation of life as is oxygen for breathing. It cannot be that life goes on at a relative level of poverty or affluence till the end. The crests and troughs of this wave of life have an implicit existence. Every rise is sooner or later followed by a fall.
“So, verily, with every difficulty, there is relief. Verily, with every difficulty there is relief.” (Holy Qur’an 94:5-6)
There are some for whom the sea is more turbulent hence the rise and fall of the tide is more marked. There are others who experience this rise and fall in a manner that almost defies the existence of any alteration. Despite the odds in a given condition, a true Muslim with his strong faith in the Almighty, observes the silver lining, something that promises him a more desirable and everlasting reward in the Hereafter:
“And We will most certainly try you with somewhat of fear and hunger and loss of property and lives and fruits; and give good news to the patient.” (Holy Qur’an 2:155)

Hence for a true Muslim, his faith (Imaan) in Almighty and hereafter is the biggest treasure of wealth in this materialistic world and due to this strong faith, he never suffer from any kind of depression and no worries whatsoever.

1 thought on “Depression VS Contentment”