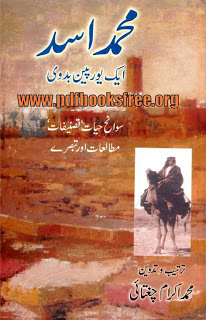 Allama
Muhammad Asad Ex Leopold Weiss 1900-1992, was a European Jews Bedouin who
converted to Islam on his visit to Germany.  Later on Muhammad Asad has become a successful
journalist, traveler, writer, translator and an Islamic scholar. Allama Asad
was one of the 20th century’s most influential European Muslims Scholar. He was
specialist in Islamic economy.

Allama Muhammad Asad was given citizenship in the recently established country of Pakistan  by Qaid e Azam Muhammad
Ali Jinnah in 1947 and was appointed as a Director of Islamic Reconstruction department,
where he made recommendations on the drafting of Pakistan’s first Constitution.
In 1949,  Maulana Asad has joined Pakistani
Ministry of Foreign Affairs as head of the Middle East Division in 1952. He was
also appointed as a Minister Plenipotentiary to the United Nations in USA.

This book is a complete
biography and history of Allam Muhammad Asad in Urdu language. The book is divided in 2 volumes. Visit the
following link to read online or download the book in Pdf format.